In Schultz’s farewell comments he said he “attributes the success of DESRON 15 during his tenure to his dedicated staff, seven outstanding destroyers, superb support from the commander US Seventh Fleet, Commander, Battle Force Seventh Fleet and the supporting commands ashore here in Yokosuka.” He continued to say that, “I can think of no better person to turn over charge of this command than you [Lyons].” 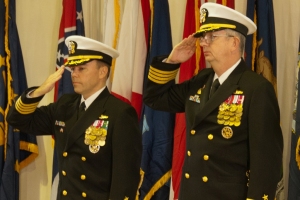 During his remarks to the audience, Lyons said, “I am both humble and honored with the opportunity to serve amongst an august group of talented professionals and fellow Warfare Commanders unified by a common purpose to underwrite peace and prosperity in this vital region.”

The change of command ceremony was the 52nd in DESRON 15’s 92 year storied history. DESRON 15 is comprised of seven Arleigh Burke-class guided-missile destroyers and more than 2,000 Sailors and serves the Western Pacific and Indian Oceans as part of Battle Force Seventh Fleet.

This entry was posted in Uncategorized. Bookmark the permalink.