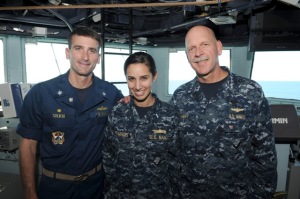 U.S. 7th Fleet commander Vice Adm. Scott H. Swift invited Fernandes accompany him for a ship-to-ship visit after hearing that her uncle is the commanding officer. Swift visited the ship to discuss operations with Chung-Hoon leadership, speak with officers and the chief petty officer mess and to recognize outstanding sailors.

“I am really excited!” said Fernandes. “It is so special to be able to visit your family underway, especially while deployed.”

After Orlich discussed fleet and ship operations with Vice Adm. Swift, he and his niece spent some time catching up on family and discussed the future of Fernandes’ career.

“This was a great opportunity to sit down and talk and give her career advice,” said Orlich.

Both graduated from the United States Naval Academy (USNA) and are from a larger family of USNA graduates and Army veterans. Orlich was at her graduation and helped her pick Blue Ridge as her fist command.

“Who would have thought we would find our two ships crossing paths and have this opportunity?” Orlich added.

The last time the two were together was for Orlich’s change of command ceremony in Tahiti when he took command of Chung-Hoon 18 months prior.

Chung-Hoon, home-ported in Pearl Harbor, Hawaii, is currently operating in the 7th Fleet area of responsibility conducting exercises, port visits and operations to enhance maritime partnerships and promote peace and stability in the Indo-Asia-Pacific region.

This entry was posted in Uncategorized. Bookmark the permalink.